By plusmining9 March 2021BBC
No Comments

Every time the price of copper shoots up, the debate in Chile about how much money the extraction of the metal contributes to the public coffers reignites.

The difference now is that the discussion is taking place in a politically exceptional year: the country will be drafting a new Constitution – with the participation of representatives elected by popular vote – and presidential elections will be held in November.

As the copper business is highly profitable and constitutes one of the greatest sources of wealth for a country that is the world’s largest producer of this metal, the discussion is not only technical, but also political.

Exactly 50 years ago, the socialist government of Salvador Allende nationalized this resource and since then it has been called “Chile’s salary.”

A few years later, under the military regime of Augusto Pinochet, the exploitation of copper was privatized and when democracy arrived in the country in the 1990s, Chile further opened the economy abroad and created a series of incentives to attract foreign capital. generating the conditions that allowed a boom of large investments in the national mining sector.

Today the private sector concentrates about 70% of production, while the other 30% is mainly in the hands of the state-owned company Corporación Nacional del Cobre de Chile (Codelco).

As the nationalization and privatization of copper have been linked to moments that profoundly marked the history of the country, the discussion about the profitability that it generates provokes conflicting opinions.

And it is that copper represents about half of Chile’s exports; it generates around 10% of GDP (a figure that can be increased to 15% if the impact it has on other sectors associated with its production is considered); it creates a significant amount of direct and indirect jobs and is a significant source of income for the national budget, especially when the price is high.

This is what happens now, while accumulating an increase in its price close to 80% since the middle of last year.

But as the price fluctuates, so does the percentage of contribution it makes to state revenues.

The contribution to the public treasury

However, at the time of the copper “supercycle” (between 2004 and 2014), when the price was through the roof, the contribution to the public coffers reached a maximum of 34.3% (2006), according to the Chilean Commission for Cobre (Cochilco), a technical body that advises the government and depends on the Ministry of Mining.

“The positive thing is that in the face of these variations, in Chile there is a stabilization mechanism that allows saving in periods of high prices, to have reserves and to be able to spend in periods of lean cows”, says Juan Carlos Guajardo, founder and executive director of the strategic analysis company Plusmining and former director of Cochilco.

Although the price is very volatile, nobody disputes that copper is fundamental for the national economy. What is in dispute is how much money private mining companies contribute to public accounts. 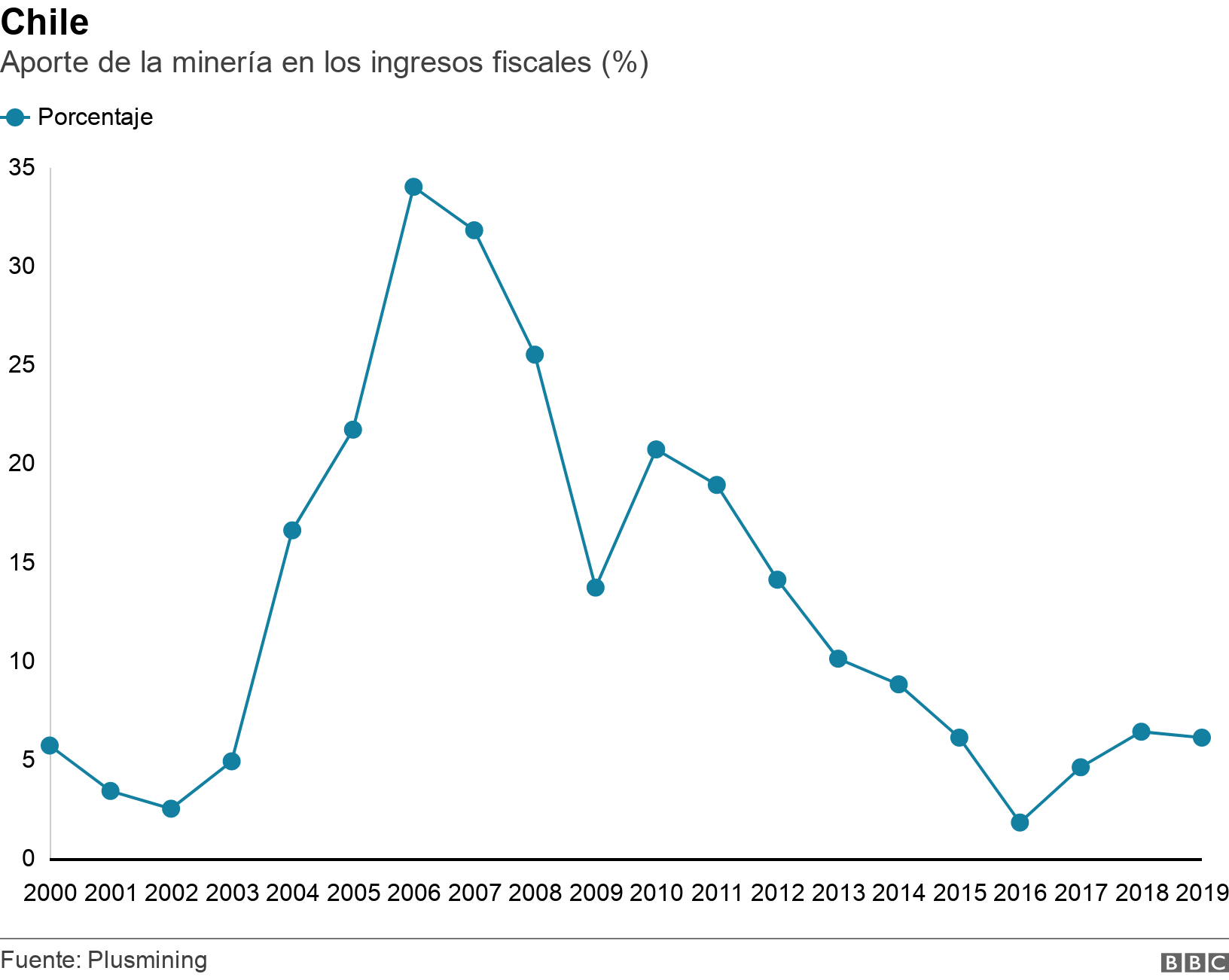 In addition to the tax level, one of the most contentious issues in the discussion is the “mining royalty.”

It involves the payment of a permit to extract a non-renewable resource, which is applied in most copper-producing countries to mining companies. In Chile it does not exist.

“If the mining companies have a good profitability close to 25%, which now with the high price can exceed 30%, the rest of the profits should remain in the hands of the State, as the Norwegians do with oil,” he tells the BBC Mundo Raimundo Espinoza, union leader of the El Salvador Division of the state company Codelco.

“We should discuss the mining royalty, although I don’t think this is the best time because the price is very high. You have to do it thinking in the long term,” he adds.

The introduction of a mining royalty has so far not been successful in Congress, despite the fact that it is a widely used mechanism at the international level.

“Most developed democracies have a mining royalty,” argues Daniel Matamala, a Chilean journalist and columnist.

Added to the discussion about the royalty is the level of taxes paid by mining companies.

“The tax system is unfair because it has never been possible to discuss democratically,” he adds in a dialogue with BBC Mundo.

And it is possible, he says, that it is one of the issues that is discussed in the process of drafting a new Constitution.

“In Chile we have one of the highest tax rates,” says Diego Hernández, president of the National Mining Society (Sonami), the union organization that groups together companies in the sector.

“If the State increases taxation, it will obtain profits in the short term, but afterwards the total collection will decrease because there will be less investment,” he warns, adding that the problem of tax discussion in Chile occurs in an electoral year. ” with a lot of populism. ”

How much do private mining companies pay in taxes?

Although it seems unusual, it is almost impossible to answer that question.

And that makes it difficult for a discussion to take place on this issue with technical criteria and not just political ones.

In Chile there is a tax system that establishes how much mining companies must pay, but since companies use complex tax mechanisms that allow them to reduce taxes, finally the effective tax burden, that is, what they end up paying to the State, is much lower.

Thus, if an international comparison is to be made, which serves as a reference to analyze whether the effective taxes paid by mining companies are high or low in Chile in relation to other copper-producing countries, there is no data available, according to the experts consulted by BBC World.

“The tax comparison is not easy. The first thing is to define how it is calculated. And the different mining districts use different modalities to apply the effective tax burden,” explains Marcos Riveros, executive vice president of the Chilean Copper Commission (Cochilco).

“It would be necessary to compare how the tax bases are calculated, what discounts are allowed to companies and many other elements, that is why it is too complex,” he points out.

Furthermore, he says, “the tax burdens vary according to the price.” And it is the price of copper “which many times determines the tax burden to be applied.”

Despite the lack of data, Riveros maintains that Chile has “an effective tax burden that is within the average range of those mining districts with similar development states, such as Peru, Mexico or British Columbia, in Canada.” 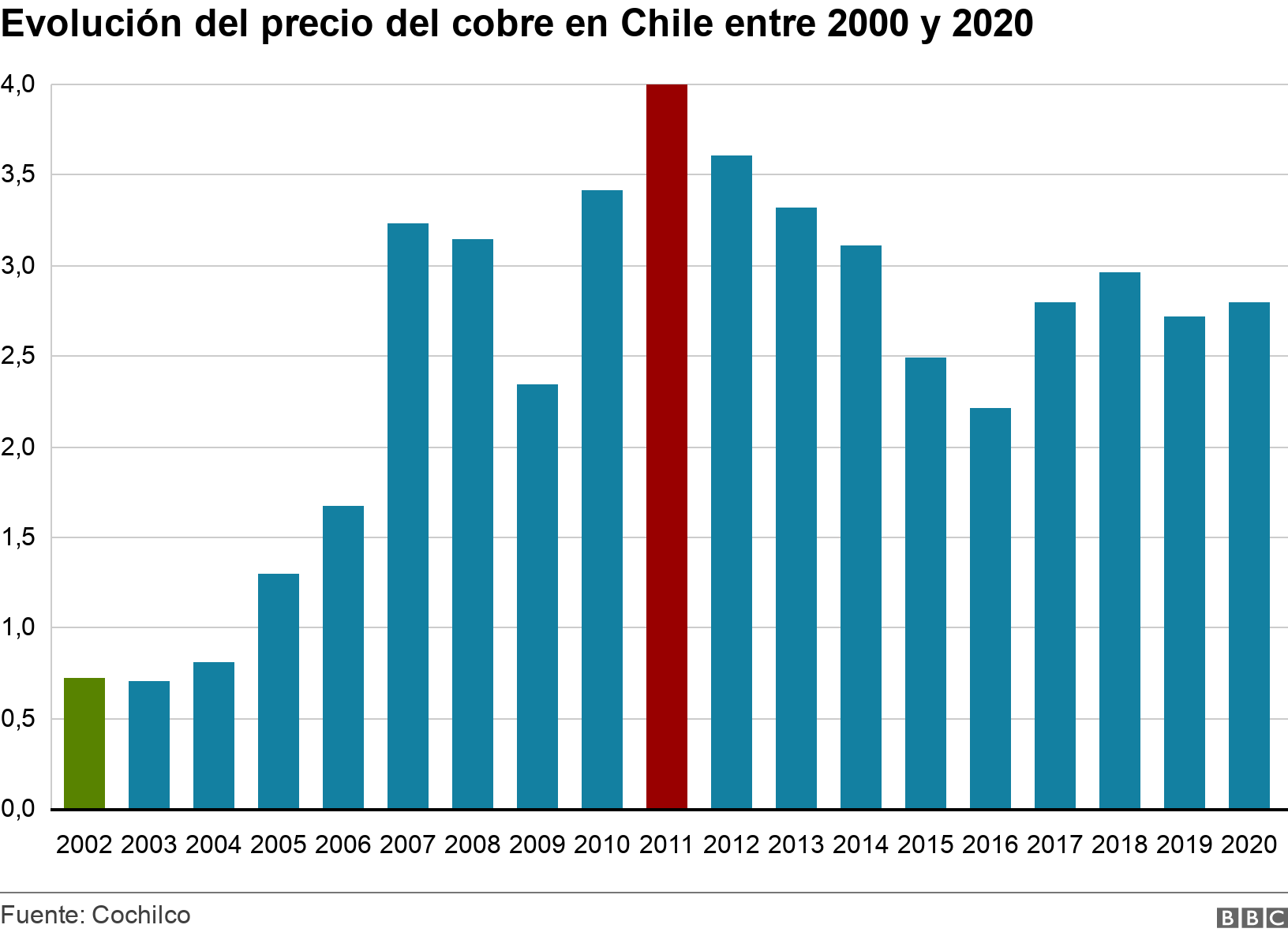 Juan Carlos Guajardo agrees on that. “The contribution that the mining industry makes to the country is in line with international standards. It is an average rate.”

The only relatively up-to-date investigation on this matter is a study commissioned by the mining companies from the company Ernst & Young, whose methodology has been questioned.

And at the end of the day, experts say, you have to compare what companies pay after all the tax deductions they have at their disposal.

“The most accurate way to make a comparison between countries would be to take the balance sheets of the companies and compare how much silver they actually paid as total taxes and how much silver they distributed as dividends, because that is basically what reaches both sides “, argues the business representative, Diego Hernández.

In Chile, what the law establishes (not including the benefits to which mining companies benefit) is that companies are subject to pay an income tax of 27%, plus a specific tax on mining activity (which ranges between a5 % and 14%, depending on profitability).

To this is added an additional tax of 35%, only in the case that the profits are sent abroad, according to Cochilco. And then there are other costs associated with the mining operation, such as, for example, the payment for exploration and exploitation patents and water rights.

What does the Constitution say?

The country’s Constitution gives the State “absolute, exclusive, inalienable and imprescriptible domain of all mines.”

However, during the military regime in the 1970s, a Constitutional Organic Law was created that gave private mining companies a “full concession” over most of the deposits, under very favorable conditions for companies.

And Decree Law 600 guaranteed them a tax invariance for 20 years from the beginning of each investment.

“According to the Constitution, the State continues to be the owner of copper in theory, but in practice it cannot even define the taxes that those who extract it will pay, but must negotiate how much and in exchange for what they are willing to pay,” says Daniel Matamala. 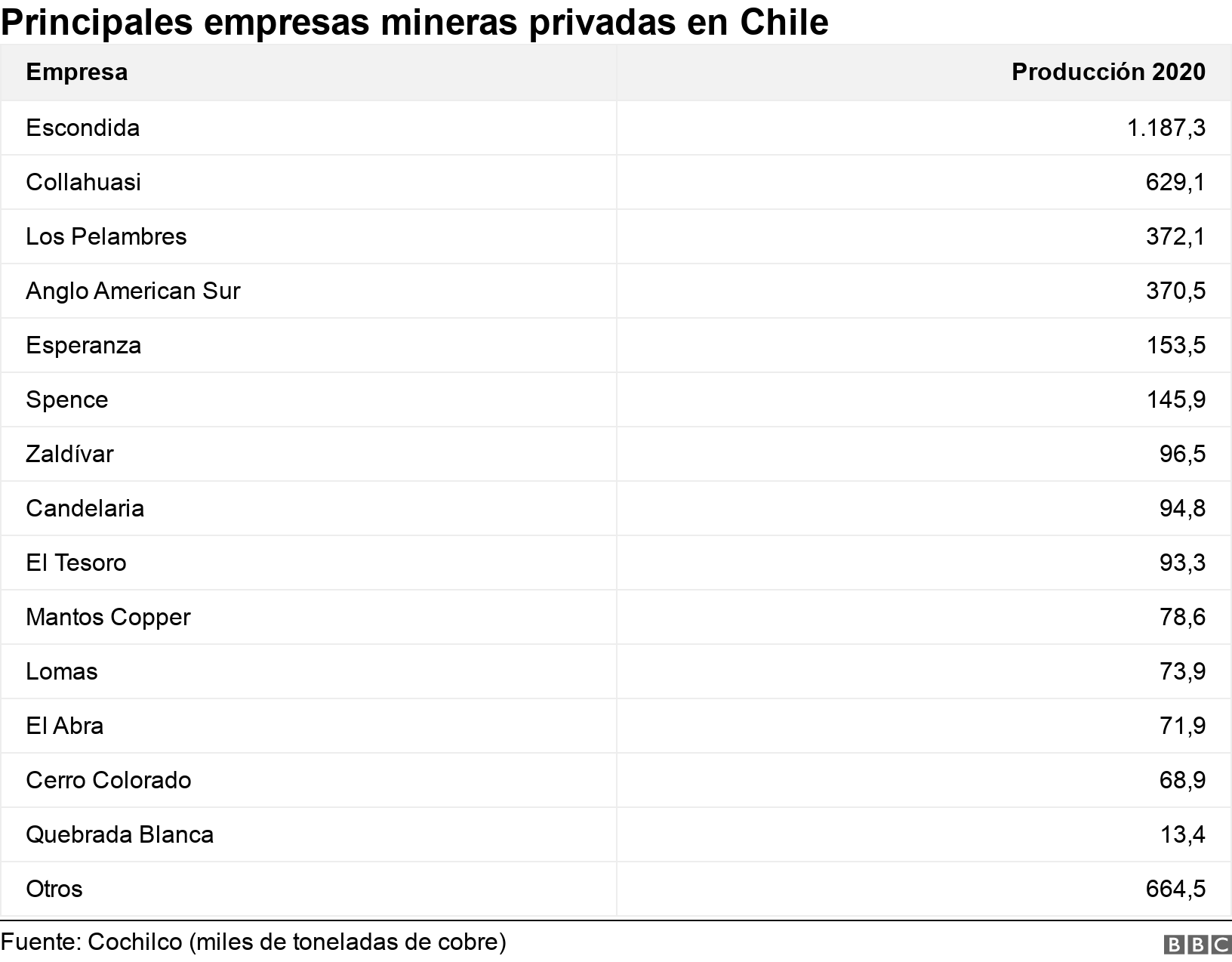 The issue will likely remain on the political agenda, especially now that the price of copper has skyrocketed and, consequently, the profits of firms will be much higher.

And while experts do not believe that current metal prices are the start of a new “super cycle”, they do suggest that the long-term outlook is encouraging.

Not only due to projections in relation to supply and demand in international markets, but also due to more structural changes, such as the revaluation of copper in the context of decarbonization plans worldwide and the demand for this metal associated with development technological.

From this perspective, copper should remain a good business for many years, regardless of the volatility of its price in international markets.

If that projection is fulfilled, and as long as there are no independent comparative studies on the effective tax burden paid by mining companies in the world, the debate will probably remain open.